Posted on May 6, 2011 by mattd | Comments Off on A Beginners Guide To Golf Equipment: Part 3

Welcome to the third part of my ‘Beginners Guide To Golf Equipment’ series of blog posts, which concentrates on the Putter.

On average about 40% of your shots on the course will be hit with your putter.

The putter can be considered the most important club in the bag, as (unless you chip in or hit an amazing iron shot) it’s very likely to be the club you use to achieve the aim of the game, which is of course knocking the ball into the hole!

Here are some of the different types of putter available. 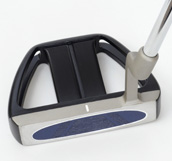 Peripherally Weighted – This means that the weight is distributed evenly around the club head, helping with balance, which a lot of golfers prefer.

Blade – Very precise but with a smaller ‘sweet spot’ (the best part of the club to hit the ball with, for best results)

Mallet-headed – for a firmer connection

There is no putter that is guaranteed results – the most important aspect is finding a putter that you are comfortable with  – but even the best golfers in the world can have problems and feel that they need to make the change – for example Lee Westwood at the recent Masters Tournament had a nightmare on the greens, had he been on his usual putting form he could well have won the tournament! He then publicly stated that he may well look to change.

And so to wrap up for today, it seems a shame to talk about putters but not mention one of the greatest shots ever played – enjoy the video below and have a great weekend!