My Tips For The USPGA Tournament

Posted on August 9, 2011 by mattd | Comments Off on My Tips For The USPGA Tournament 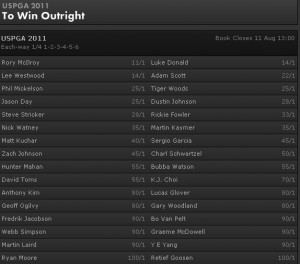 The USPGA Tournament takes place at the stunning Atlanta Athletic Club this week, with the practise rounds already underway and the tournament itself set to start on Thursday.

As usual for these big tournaments, I’ll have a few pounds riding on the result – here are my tips for the 2011 title:

David Toms is on great form – in 16 tournaments so far this season he has had five top ten finishes. At around 55/1 he is exceptional each-way value.

Jason Day – The Australian has had an brilliant eight top ten finishes in 16 tournaments so far this season and gave fellow countryman Adam Scott a run for his money last week. At 25/1 he’s worth a few pounds of anybody’s money.

Martin Laird – The Scotsman has over $2.5m in prize money so far this season and is no stranger to the loft heights of the leaderboard – he has a first place and a third place to his name this season so is worth a punt at around 90/1.

Luke Donald is still the world’s number one golfer and therefore can never be ruled out – his form over 13 tournaments this season has been outstanding – he has over $4m in prize money to his name and will be looking to add to that this weekend. 14/1 is a little tight but is a useful cover bet based on form.

Paul Casey has been making cuts but fading away from there. He’s a better golfer than his current form suggests so if you can get the 140/1 that’s currently being offered then it’s worth a look.

Kj Choi – The South Korean is in consistent form and looks good value to me at 70/1 – his experience also counts in his favour.

Who are you backing? Let me know over on Facebook.