The Basic Rules Of Golf

Learning to play golf is not just about picking up a club and hitting a ball – far from it. Of course fundamentally that’s the physical aspect of the game, using one of a variety of clubs to hit a ball into a hole a few hundred yards away, but there are also rules and ettiquette to follow too.

The beauty of golf is that although you can play against one, two or three other people at once, you are also all playing against the course, and so every course you play on adds a totally different dimension to every game of golf that you play.

A standard golf course is made up of 18 holes (although Dukes Meadows Golf Club, where I am based, is a challenging nine-hole course, although you can always go round twice!). The first shot on each hole is usually hit from a tee, in an area where different markers indicate whereabouts you should hit the ball from. There are separate markers for gents, ladies, and also professionals.

The course will more than likely be covered in hazards which you will need to try and avoid hitting – for example bunkers, rough or longer grass, and the dreaded water. The place you want to be is the fairway – closely-mown grass that usually runs length-ways down the centre of the hole that you’re playing. 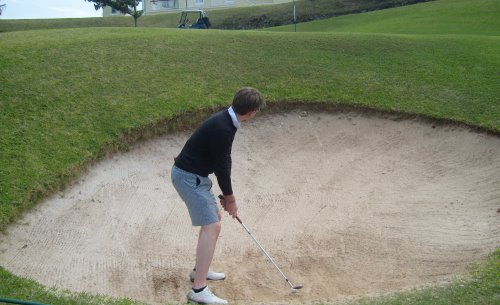 Try And Stay Out Of The Bunker!

The hole itself will be on the green – a section of even more closely-mown grass  – where you will look to putt the ball home. You can see the hole from a distance represented by a flag with the number of the hole usually written on it. The flags are usually yellow or red.

So your aim is to get from the tee to the hole in as few shots as possible – the combined total of shots that you take makes up your total score, and so if you take less shots than your opponent, you win the game – simple!

There are a number of golfing terms regarding scoring that even if you’re not familiar with playing golf, you probably would have heard of. These usually refer to the number of shots you have taken on each hole either side of the par for the hole. Holes are usually par 3, 4 or 5 – these are based on a combination of difficulty and length, and you are aiming to take a minimum of that number of shots per hole. The par for the course is the par for each hole multiplied by the number of holes on the course.

At the end of the game, your total score is balanced against the par for the course. So if the par for the course is 70, and you shoot 68, you are 2 under-par for the round. If you shoot 80, you are ten over par. When playing enough times, you will eventually gain a handicap – effectively the average number of shots you take to go around above par. This enables you to play on equal terms against the most experienced golfer.

As a professional, I don’t have a handicap at all, so if I played against someone with a ’10’ handicap, 10 shots are deducted from their overall score in order to make the competition fair for ow you were able to play against the course on the day for your ability.

Golf has a great tradition of sportsmanship, and often honesty is required in terms of admitting how many shots you have taken per hole – only in major tournaments will you find a referee or umpire.

Once the ball is in play you should not touch it with anything other than the club, and only then when taking a shot. This can be particularly tricky in the long grass or sand! If you land in the water you can choose a new ball and take a ‘drop’ in line with where the ball entered the water, but no nearer the hole.

There are a lot of other rules to follow but generally what you think seems right will be right.

In terms of ettiquette – it’s best to try and remember two things: respect the course and respect your fellow golfers.

For example you should never distract a fellow player as he takes a shot, try and remember to repair the pitch and look after / rake the bunkers, and also be careful when walking across the greens – it is considered disrespectful to walk across the path that your player needs to take to putt the ball into the hole.

I hope that gives you a good idea as an introduction to the rules of golf. For more advice please contact me directly by clicking here.