Woods’ Golf Lessons Are Starting To Pay Off

Posted on October 11, 2011 by mattd | Comments Off on Woods’ Golf Lessons Are Starting To Pay Off 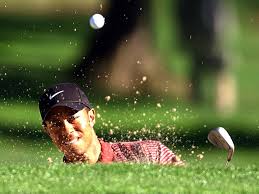 Tiger Woods barely missed chipping in for birdie on the 14th hole, came within a hair of rolling in his long eagle putt on 15, lipped out his birdie chip on 16, and left his long birdie putt a half a rotation short on 17.

Woods was mostly dialed in for the third round of the Frys.com Open at CordeValle, but after his ball refused to drop on his front nine — the course’s back nine on the scorecard — and he made a few terrible mistakes on his back nine, he signed for his second straight 68.

“The golf course could have been had today,” Woods said.

”My Golf lessons have been paying off”

At four under for the tournament, he’ll almost certainly be too far back for a shot at the trophy Sunday. Because 53 players had to return to complete their second round at 7:30 Saturday morning, pushing back the start of the third round, officials sent players off both tees in threesomes.

Woods played with Louis Oosthuizen for the third straight day, and they were joined by Matt Bettencourt. The three played behind the lead group of Paul Casey, Ernie Els and Bud Cauley once those three teed off at 3:25 p.m.

Woods birdied the hole, reaching the green in two shots and two-putting, and was six behind the leader Els after the big South African bogeyed the 10th. Woods was far from perfect in pursuit of his first PGA Tour title in more than two years, but he looked better Saturday than he did Friday, just as he’d looked better Friday than he’d looked Thursday.

“Absolutely it’s gotten better,” he said. “I felt so good over the ball today.”