Posted on September 12, 2011 by mattd | Comments Off on Walker Cup Victory For GB & Ireland 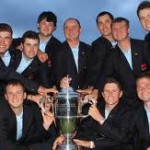 Great Britain and Ireland’s true spirit saw them to a famous victory as they took the Walker Cup for the first time in eight years and only the eighth occasion in the history of the fantastic  matches.

Seen as underdogs by all bar the team and its inspirational captain Nigel Edwards, the home side upset the formbook and secured their 14-12 win with three matches still to come in.

GB&I took a 10½-5½ lead into Sunday’s singles but despite holding the initiative, many of the matches still had the potential to swing either way. The nervy situation meant that Jack Senior’s brilliant birdie putt from the front of the 18th green to snatch an unlikely half against Nathan Smith was crucial.

Michael Stewart’s 3&2 win over Patrick Rodgers calmed down nerves and he was among several heroes, included the outstanding 17-year-old Rhys Pugh, who made it three wins out of three when he beat US amateur champion Kelly Kraft 2&1.

And moments after Stewart’s win GB&I’s Steven Brown parred the last to gain a half against Blayne Barber to secure the famous victory.